I grew up in school praising the man as the discoverer of America (as in U.S.A.) And also believing He was a Christian according to his own writings.

Yet, this same man forced the natives into slavery and hard bondage. Even going so far as to have their hands chopped off if they didn't produce enough gold. Not to mention all the people that died from being exposed to small pox and other new diseases their bodies were unable to fight. 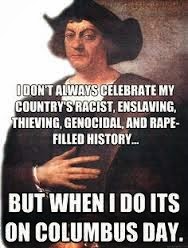 This leaves us with a very mixed legacy. He did find the Caribbean and later other islands part of Central and Southern America... But he also treated people badly. To the point that Queen Isabella of Spain had an official come and get him and arrest him and bring him back to Spain in Chains.

Awkward. The guy was stripped of his titles and lost his fortune. Before death he did get some money again but he died still believing he had found a way to the Indies. And probably was more than a little disillusioned.

This morning at our group meeting before school starts a devotion was read from Christopher Columbus' own writings.

My poor daughter. I think she was stunned to say the least. She had just told her brothers in the car yesterday,

"Let me tell you. If anyone says Christopher Columbus was a good man. They're not telling the truth. He was a bad man.... I will spare you the details."

So, was this man truly a Christian who went off and did some really horrible things? Was he just a sinful man? How did he justify his actions??? I don't know. By even the best accounts he sounds like a maniac. I don't have the answers. But it's interesting when you're faced with truths.... even very uncomfortable truths. I'd rather the truth prevail than be ignored or masked or dismissed. Even if this makes me very unpopular.

Trusting and knowing that the Lord is bigger than ALL of this is a comfort. He's not surprised. He's not  unaware. And He's redeeming even very horrible things that occurred in our history.

*Sources: Please keep in mind these accounts are not all appropriate for children to read. The misuse of women is discussed in detail, as well as other violent atrocities.

Best explanation I found is from the oatmeal. Even includes the story of someone who should be honored...
http://theoatmeal.com/comics/columbus_day
This is what Libby and I read:
http://www.biography.com/people/christopher-columbus-9254209#synopsis
http://indiancountrytodaymedianetwork.com/2013/10/14/8-myths-and-atrocities-about-christopher-columbus-and-columbus-day-151653
http://latinamericanhistory.about.com/od/thevoyagesofcolumbus/a/09columbustruth.htm
http://latinamericanhistory.about.com/od/thevoyagesofcolumbus/a/09columbustruth_2.htm
Help homeschooling my thoughts struggles