- January 10, 2018
It's a scary thing to put yourself out there. To share a part of you that has brought tremendous amounts of shame. I've seen a couple friends be vocal. I'm so proud of them. They are so brave.

My fear of saying, I too have been sexually abused comes from a place of not wanting to draw attention to myself, not wanting to be seen as dramatic, and knowing I've not had it as bad as others.

But something compels me to write ME TOO. Because I recognize that there are likely other woman, like me, who have downplayed the wrong(s) that have been done to them. They minimize their experience. They don't know it's not their fault.

My first encounter of sexual abuse was being molested at age 5.

My second group of encounters were during sleepovers when I was 12 and on my 13th birthday by a friend.

And the last time was when I was 20 on a missions trip for a well known Christian missions organization.

Those encounters left me feeling confused, ashamed, humiliated and lonely. I was terrified. I blamed myself. I thought I was the one who was wrong. I felt so dirty. So broken.

When I spoke up immediately to my missions leader about what happened the issue was downplayed and swept under the rug. In fact I was forbidden to tell my parents as well as the rest of the members of my team about what happened.

So I did what the stupid "good Christian girl" does and I shut my mouth. My leader didn't seem to believe me, so why would anyone else? I was in a foreign country. I didn't know my rights and I was very afraid. 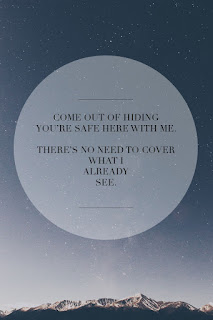 I will not be silent just so that others can feel comfortable.

There's a short song in Steffany Gretzinger's Album "The Undoing" that resonated strongly with me. I don't think it is specifically about sexual abuse but as a person who has struggled with people pleasing and learning to be brave, and come forward I find strength and comfort from this song.

The song is called I Spoke Up

I hope if sexual abuse- molestation, rape, being forced or manipulated into a sexual act has happened to you that you are able to find your voice. Get help. Reach out. If the first person you tell doesn't listen or believe you find someone else.

I've been silent for a long time, only telling people privately when the situation arises, but no more. No longer. Because there are women out there that need to know that they are worth being spoken up for.

Our God is healer. He redeems and mends broken things. He saves those who are crushed in spirit. He is close to the broken hearted.


Have you been sexually assaulted but are afraid to say something? There's a national sexual assault hotline that can provide help here.


And finally if you have a child-daughter OR/AND son please talk to them... ask them if ANYONE has ever made them uncomfortable or asked them to do something they felt was wrong. It's not just an issue of the opposite sex of of a family member.  It can be opposite or same sex, someone their age or older.

Educate your children about what constitutes appropriate and inappropriate touching. I also thought it was helpful to learn to not have secrets... you can keep surprises, like what you're getting for someone for a birthday or Christmas, but not secrets. Better explanation can be found in this book


Some Secrets Should Never Be Kept by Jayneen Sanders


There are many books you can use for educating your children about appropriate touching:

It's MY Body: A Book to Teach Young Children How to Resist Uncomfortable Touch (Children's Safety Series and Abuse Prevention)  by Lori Britain

I Said No! A Kid-to-kid Guide to Keeping Private Parts Private- Kimberly King

Do You Have a Secret? (Let's Talk About It!)- Jennifer Moore Mallinos

Your Body Belongs to you by Cornelia Maude Spelman

No Means No!: Teaching children about personal boundaries, respect and consent; empowering kids by respecting their choices and their right to say, 'No!' by Jayneen Sanders

This post is inspired by Kate Thomas. Thank you for making me want to be brave.
#metoo confessions Courage grief Help Hope Jesus messes my thoughts sexual abuse struggles

Charissa said…
<3 you, sweetie! I know the stats (and lived through sexual abuse myself) and yet it still surprises me when I hear these stories from friends. Thank you for being brave! I pray these stories will bring home the fact that it is more than just numbers, it is the ones we love who are being hurt. You are AMAZING and I'm so grateful for you.
10:24 PM