Barbie & Ken: The Break-Up and Getting Back Together. 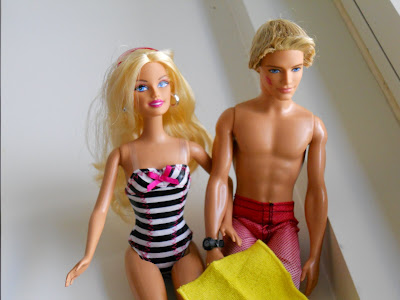 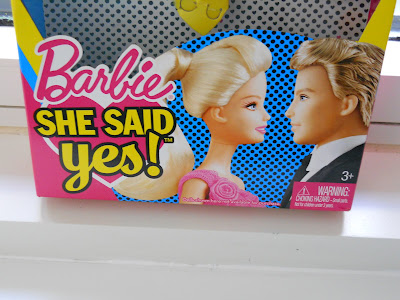 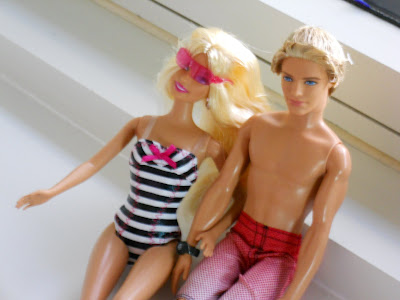 Okay, so apparently there was this dumb thing where Barbie and Ken broke up... and I remember thinking, that is just so wrong. They wanted Barbie to be "single & independent" blah, blah, blah. Silly I know, here's the info. below.

Libby was able to purchase this set of dolls. We had some credit and this was her choice. She wanted me to take pictures of them.

Entertainment weekly said the following this past Valentine's Day. I don't really care about them but they explain the break-up, etc.

One of America’s most epic romances is back on: Mattel is announcing today (Feb. 14, 2011) that, after shocking the world with their break-up in 2004 and rekindling their love on the set of last year’s blockbuster Toy Story 3, Barbie and Ken have decided to give love another chance after seven years apart. The pair’s plastic love is red-hot once again, just in time for the most romantic of holidays, Valentine’s Day. Yesterday, Barbie hinted that something might be in the works on her Facebook page with the status update: “Who knows…maybe I’ll have a Valentine this year.” Early this morning, Barbie changed her status on Facebook to “In a Relationship.”

EW called up Mattel to get a little context on the news. “They were reunited as costars, as you know, on the set of Toy Story 3,” explains Lisa McKnight, vice president of marketing at Mattel. “As we like to put it, they found they were kind of missing each other. They had a lot of fun together. Now a little time has passed since the shoot and all the premiere noise around the movie and all that good stuff, and I think they both realized that they’re made for each other.”

In case you’re unfamiliar, here’s a quick refresher on the couple’s storied romance: Barbie and Ken met on the set of their first commercial in the spring of 1961. They were together and happy — winding their way through the sometimes-hilarious trends of the ’60s, ’70s, ’80s, and ’90s — before tragedy struck on Valentine’s Day in 2004: The couple surprisingly announced that they were going to spend time apart, and Barbie began dating the charming Australian surfer Blaine. In 2006, Ken made a play for Barbie’s heart again with a Hollywood makeover and while it scored him big points with Barbie, the two just remained friends. Their casting in last year’s sequel Toy Story 3, however, brought them back together, and things began to rekindle for the pair, leading to today’s announcement. The full story of the couple getting back together has been well documented.
So was their seven-year split just a blip on the radar for these star-crossed lovers? “To be fair to them, they have been together for about 43 years, so you know, I think everyone needs a break,” says McKinght. “So they took a little break and had fun out on their own and were certainly out and about, but I think ultimately, again, they were destined for each other.”

Die-hard Barbie and Ken fans were apparently clamoring for the pair to get back together, according to Mattel. “In 2004, we certainly got a lot of feedback when they did break up,” McKnight says. “People were devastated and we made the evening news and it was crazy. More recently, when people saw them together again on the set of Toy Story 3, people were really pushing for them to get back together again. We got a lot of formal petitions from brand fans, Barbie fan groups, asking for them to get back together. I think there was one group that sent in a three-page letter, expressing how they felt and how they never should have broken up in the first place and they’ve just got to be reunited. So there’s a lot of passion there. They really are the sort of ultimate ‘it’ couple. So everyone’s rooting for them to get back together.” A poll that Mattel has been running on www.barbieandken.com found that fans were more than in favor of them reuniting, with the Love-O-Meter results reading “Give Him a Chance!” yesterday afternoon.

Ruth Handler watched her daughter Barbara play with paper dolls, and noticed that she often enjoyed giving them adult roles. At the time, most children's toy dolls were representations of infants. Realizing that there could be a gap in the market, Handler suggested the idea of an adult-bodied doll to her husband Elliot, a co-founder of the Mattel toy company. He was unenthusiastic about the idea, as were Mattel's directors.

During a trip to Europe in 1956 with her children Barbara and Kenneth, Ruth Handler came across a German toy doll called Bild Lilli. The adult-figured doll was exactly what Handler had in mind, so she purchased three of them. She gave one to her daughter and took the others back to Mattel. The Lilli doll was based on a popular character appearing in a comic strip drawn by Reinhard Beuthin for the newspaper Die Bild-Zeitung. Lilli was a blonde bombshell, a working girl who knew what she wanted and was not above using men to get it. The Lilli doll was first sold in Germany in 1955, and although it was initially sold to adults, it became popular with children who enjoyed dressing her up in outfits that were available separately.

Upon her return to the United States, Handler reworked the design of the doll (with help from engineer Jack Ryan) and the doll was given a new name, Barbie, after Handler's daughter Barbara. The doll made its debut at the American International Toy Fair in New York on March 9, 1959. This date is also used as Barbie's official birthday.

Mattel acquired the rights to the Bild Lilli doll in 1964 and production of Lilli was stopped. The first Barbie doll wore a black and white zebra striped swimsuit and signature topknot ponytail, and was available as either a blonde or brunette. The doll was marketed as a "Teen-age Fashion Model," with her clothes created by Mattel fashion designer Charlotte Johnson. The first Barbie dolls were manufactured in Japan, with their clothes hand-stitched by Japanese homeworkers. Around 350,000 Barbie dolls were sold during the first year of production.

Ruth Handler believed that it was important for Barbie to have an adult appearance, and early market research showed that some parents were unhappy about the doll's chest, which had distinct breasts. Barbie's appearance has been changed many times, most notably in 1971 when the doll's eyes were adjusted to look forwards rather than having the demure sideways glance of the original model.

Barbie was one of the first toys to have a marketing strategy based extensively on television advertising, which has been copied widely by other toys. It is estimated that over a billion Barbie dolls have been sold worldwide in over 150 countries, with Mattel claiming that three Barbie dolls are sold every second.

The standard range of Barbie dolls and related accessories are manufactured to approximately 1/6 scale, which is also known as playscale. The standard dolls are aproximately 11 1/2 inches tall.

Barbie products include not only the range of dolls with their clothes and accessories, but also a large range of Barbie branded goods such as books, apparel, cosmetics and video games. Barbie has appeared in a series of animated films and is a supporting character in Toy Story 2 and Toy Story 3.

Barbie has become a cultural icon and has been given honors that are rare in the toy world. In 1974, a section of Times Square in New York City was renamed Barbie Boulevard for a week. In 1985, the artist Andy Warhol created a painting of Barbie.

So, that's a lot about Barbie, isn't it. This was my Mom's beloved childhood past-time. She loved Barbies. I remember while growing up and talking about her childhood and she would tell me, "They were my friends." Barbie made up her imaginary world as a kid. I'm sad her dolls are no longer with us. They were thrown away unbeknownst to her... sad. But the tradition continues today with my Libby girl. Barbie spends a lot of time at the hospital these days... giving shots and chemo... and helping cure cancer... at least according to Libby.
Libby Anne Hope Sunshine

Contact him if you need urgent help to get your Ex Lover back, it's guaranteed that he will help you. Email him Robinsonbuckler@hotmail. com
7:37 AM