We all Scream for Ice-Cream... 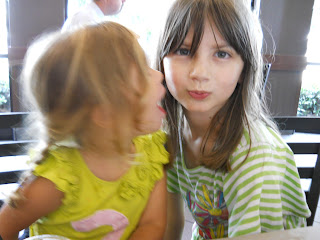 I had the pleasure of spending time with one of my dear friend's children. Evangeline and Elliot are so special to me. Before Madison was born it was Evangeline that made me feel like an "aunt".

On Thursday, Libby and I got to take Evangeline out on a "mini-date" of sorts. First we went to Chick-fil-A where the girls played, ate lunch, played, had ice-cream and then played. We went to dollar tree and they had fun picking out some prizes: a princess puzzle, candy necklace, bracelet and ring, and a spinning top. Not to forget the fabulous pink basket to carry it all in.