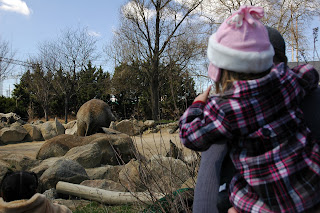 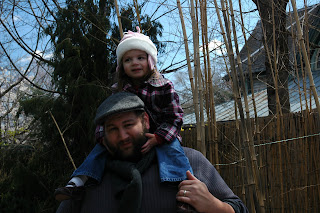 Definition of Zooey: 1.) Reference to the title Franny and Zooey by J.D. Salinger 2.) Days spent enjoying the animals at the zoo and bonding with family and friends.

I'm referring to my definition 2. I love going to the zoo. There is something about seeing the animals and discovering new creatures that I just love.

The Philadelphia Zoo boasts on it's website (www.philadelphiazoo.org) the following:

It has some of the most popular African species: warthogs, sable antelope, Mhorr's gazelle, reticulated giraffes, hippos and zebras; exotic South American animals, such as giant anteaters, capybaras (the largest rodents in the world) and giant bearded pigs.

More than 1,500 rare and exotic animals from around the world; 42 acres of picturesque Victorian gardens and historical architecture.

Recently we decided to go on a day that was cold so that there would be fewer people. We enjoyed the reptiles and amphibians and all the different monkey/primates. We loved the tigers and leopards. It was cool to see the large turtles and the crocodiles and alligators... as well as my favorite, the lemurs.

The kids had a great time and we're planning to go again this Friday. We purchased a family pass...it's an amazing deal. If we go twice to the zoo we've more than payed for our membershp.

Libby was completely struck by the peacocks. I don't think she knew what to think them. It's been over a week or two since we've been to the zoo. Yesterday morning she said to me (first thing she said) "Lions. Monkeys. Peacocks. Tigers." I said, "Oh Libby, are you thinking about the zoo?" She smiled and said, "to the zoo... lions, peacocks... and DINOSAURS."... I've never heard her say dinosaurs before and I have no idea where that came from. I'll be honest with you, we don't have any dinosaurs at our zoo.


By the way, our flamingoes our orange. The reason most flamingoes are pink is because of some type of shrimp they eat. Well, our zoo thinks it's a bit expensive so they give them sweet potatoes... voila, orange flamingoes!

Thanks for doing the blog. I just was resent the link and I love reading it. It makes me feel closer than a country away. California may be warm, but it is cooler to me without you guys close. Love you all. Give Lib and Sam a kiss for me. Maybe one for your husband too...

Anonymous said…
Lions and Tigers and Dinosaurs, oh no.

What a blessing you are Jen to share these treasures of memories and pictures and neat info.......the thing about the pinkagmingos.....well, some are orange...can't wait to tell Cab.

How are exams going?
love to you all with lots of xxooxxooxxo
Faf
6:44 AM

I can't wait to come visit and go to the zoo with you guys. I love you all so much!

Maybe if I move to DC you can come visit me and Libby can see the dinosaurs at the museum. :-)
8:45 AM

Ashleigh said…
We love going to the zoo too. The family passes at zoos are such great deals, like you said! We have one and it is well worth the money. I took the girls last week and they had a ball. I was hoping to go back this week, but we'll see. Depends on how quickly the snow melts.
10:07 AM

Jenn said…
Happy Zoo Days! And if you happen to spot some cool dinos we would love to see the pics! :)
3:31 PM

Bethany said…
Oh the zoo is so fun with kids. That is funny about your orange flamingos though. CRAZY they give them sweet potatoes. I knew that the shrimp they eat made them pink though...didn't know you could feed them something else and change their color. FUNNY.
2:01 PM