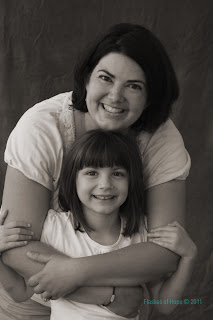 Me and My Girl.

This is my Libby Anne Hope. She is 7 today. I can't believe it. I remember when she first came into this world. Crying the most beautiful cry. Her eyes dark blueberries. She looked around and was completely alert... taking in everything. She was adored. I don't think the hospital had ever had so many people come clustered outside the nursery to see one baby. I told the nurses of why there were so many... they had come to see the Hope girl.

Libby was named after my precious sister. When my sister and her unborn son, Sam, were killed in a car accident, I decided that if the child I was carrying was a girl, her name would be Libby. So I found out on my birthday in June that indeed I was having a girl. I knew I was having a Libby. She would never replace my sister but she would be special.

I didn't know Libby would be my only girl. I thought having one I could probably have another... 4 boys later, right?! I realize it's a miracle. I guess I should have considered myself warned. Libby after all was the first Napier girl born in 82 years... all the other Napier women were married into the family. It's a world of boys out there....

So many reasons Libby is special... But I love her not just because she bears my sister's name or  the first girl born in 8 decades.... but because She is MY girl! My sweet, sensitive, emotional, compassionate, thoughtful, perfectionist, dramatic daughter! I love her laugh and smile and how she goes and on and on when she talks. I love her singing and dancing. I love her care for her brothers. I love her heart. I love her creativity... from her outfit selections to her artwork... she expresses herself.

I am so proud of her and I love her so much!!!
Birthdays Libby Anne Hope motherhood my thoughts Sunshine

Rebekah Judd said…
This is such a great picture! It should be on a billboard. Happy Birthday, sweet girl!
1:45 PM

Jessica Rockey said…
I asked my mom how Libby was in class today... she answered... "Man, that girl is her mother's child!" Big eyes... expressive... dramatic... caring... lovely.

I will always remember Libby in my ballet classes. During 'free dance' time... all the other kids would run around in a circle... or just copy each other. But not Libby. Libby would go to the center of the floor, close her eyes and dance her little heart out! I LOVED watching her every week.

I can't believe she's 7! I remember the day she was born so clearly. I remember seeing you being wheeled out of the delivery room. You looked so happy... and beautiful. You're a wonderful momma! Love you friend:)
2:59 PM

Sarah said…
Those seven years went so quickly! Happy Birthday to beautiful Libby from your friends far away over the ocean - we hope you are having a wonderful day full of treats and special things...
3:25 PM

Mixue said…
What a beautiful girl. What a beautiful mom. I love that photo of the two of you. I remember the day you found out you were going to have a girl! It's been an honor to be a part of this journey with you these last 7 years, sometimes from Asia or Europe, but always with you in my prayers! I love you both so much!
9:25 PM