3 a.m. and other "Magical Moments" 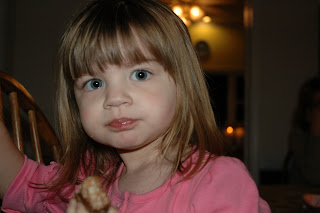 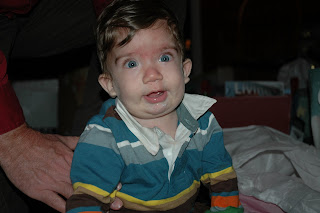 Well, we started off on the wrong foot by going to bed after 1 a.m. So what were we expecting? Yes, we are indeed gluttons for punishment. I heard the crying first. It was Samuel, it was 3 a.m. Then comes the siren-Libby. Now by this point Mike stirs. I try to explain to him that Samuel woke up first who in turn woke up his sleeping sister. I don't realize how muffled I sound (I'm wearing ear plugs). Mike's response is, "I'll get Libby and put her in bed with us." so I said okay but was wondering what he would do with Samuel. So Libby comes in bed. I'm getting frustrated after the 50th (or so) "Hello Mama!" Samuel is still crying, Mike is sleeping. So he didn't do anything with Samuel (anything meaning change diaper or give him a bottle.) So I get up and get Samuel, he's completely soaked. So I grab some pajamas.... the ones that you have to fit over the head, not zip ups or button ups... what the heck was I thinking?! So I bring him into our room, get him out of his wet clothes, change his diaper and then the wrestling begins. He might be small but he sure is feisty. Over the head (he's yelling), one arm in, (he's screaming), and then I can't even get his legs in because he's rolling around so much. I'm so tired I can't even think straight and I'm attempting this in the dark. At this point it's 3:46 in the morning. Finally Samuel has his pajamas on and I put him back to bed (with a blanket covering the wet spot)... aaaah. (so I think).... Where did the wild moose come from? There is a loud noise in the room. Libby stares at me with wide eyes. "Honey, it's just papa snoring, try to get some sleep." Ha ha, if it were only that easy. The moose goes on. After pushing, shoving and kicking, he wakes up and I explain that he's snoring loudly. this repeats itself 3 times and then he gets up and leaves the room. Libby and I fall asleep exhausted. Every now and then I hear a "mama, mama" and see two eyes staring at me... but I roll over and fall asleep. Oh the blessings of 3 a.m.

Anonymous said…
Yes, its true. I vaguely remember thinking, "why is she trying to stuff him into that beast of an outfit @3.30 am?" It's a difficult job at noon. I also vaguely remember being informed that my ever-so-light sleeping noises were keeping two (instead of the usual one) from their repose. As I think, "OK this time I'll stop." I fall asleep again. Eventually I end up on the living room floor waking to find that I'll soon be late to my first day of the Spring semester. Well, we've found the other kind of hangover but the "drinks" are worth it.
2:47 PM

Ashleigh said…
Okay, I found this so humorous. Probably because Ted and I have had nights like this -- where there's little sleep, lots of confusion, and many memories made. Hope you guys are getting some rest today.

Anyway, Jennifer, I love the way you capture life in your blog. You have a beautiful, humorous, poignant way of doing so. :-)
4:25 PM

LOVED IT my friend!!! Oh, those long sleepless nights ...