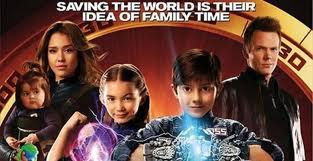 On a whim today we picked up Libby from school (instead of her riding the bus) and Mike, Samuel, Libby and I went to cinema cafe (where we had free passes) and saw Spy Kids: All The Time in the World. Kristin watched Peter and the twins for us. (Thank you Kristin).

It was fun to get to do something so spontaneous. And it was a good movie too.

One thing I appreciated about the movie was the importance of spending time together, in particular, as a family. It showed different ways that people view time. The Dad played by Joel McHale (Jeff Winger in the community) thought that if he worked his 5 year plan he would then get to enjoy time with his kids. He was later encouraged that he didn't know how much time he would have. He was told that all he could know he would have in the future was regret. That his kids would be grown up by the time had time to spend with them.

The kids also came to have a new appreciation of their stepmom who truly did care about them. And siblings also learned how to be kind each other and respect each other.

I enjoyed it. Libby even shed a few tears at the end. Samuel seemed to watch the whole movie for the most part. Although at times he did swivel in his chair a lot and kept bouncing from seat to seat.

Although I don't see myself as a supermom I felt like I could compete with the way The Spy Mom she juggled a bottle and a baby carrier while fighting crime :) Okay, not really. And I don't go around wearing leather suits either. But I do enjoy my kids and am thankful for them.

Overall, a success. And a lot of fun.
movie My Kids Sunshine