A Teaspoon of Earth and Sea

One of the interesting and dominant threads of the book is the main character, Saba's relationship with her identical twin sister, Mahtab. The story is well written, a coming of age story of Saba, a young Iranian girl. 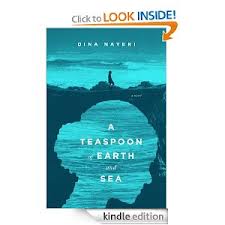 The tale starts with an accident of some sort in which you are left uncertain of whether or not her sister, Mahtab has been killed. Saba was supposed to go to America with her mother. The mystery becomes two fold. Two stories follow. One in which her sister has not died and has fled to America with her mother and Saba is left behind. The other story you think Saba and her Mamman are dead and are wondering if the other story is a coping mechanism, an imagination that is fueled by grief. You wonder if she's attempting to process her sister's death and the mysterious disappearance of their mother through made-up stories.

I found myself pierced to the core by some of the last thoughts she has on her sister.

This quote is Saba talking to her father....

"Why is it so awful to keep hope? Maybe that's just what we both need." She gets up to refill their tea, but her father takes her hand. She stops but doesn't sit back down, just stands over him, letting him take her small hands in both of his like a firefly that might flutter away. He pauses for a long time and she can see he is looking for the right words__ that he is struggling to say them. "That particular hope is good, yes. But there are better ones. Remember what your mother and I use to to tell you girls?" he asks. "That you were destined to be great. That it's in your blood to be powerful and strong and do big things?"

Saba nods. They were going to be twin titans, taking all their English words and piles of books and weaving a new history for the world, or a city, or a family. She hasn't done any of that.

Her father continues, all the while refusing to let go of her hand, as if he thinks she will run away, or that this meaning will soak through his sweaty palms into her veins. "Saba jan, accepting the truth doesn't dishonor your Mama and Mahtab. But it's keeping you from becoming that woman. You're holding your hope so tight, using up all your power to hang on to it, that it's become like a big stone weighing you down. You see? Now you have you have no power left. And even if you try, you can't fly off and do all the things you were destined to do."


When I read that passage I was struck by the similarities I have felt... sometimes I have held so tight to my sister's memory that I am afraid it might be keeping me from being the person I am supposed to be. That I don't have the power or energy to be what I am supposed to be because I am unwilling to let go of my hold.

One of the things that Saba is told is that because she is a twin she and her sister are connected by blood and that they have the same fate... Identical twins= same story/fate.

I know that later in life, long after Mahtab is beyond the reach of my imagination, I will pick up the phone, wanting to discuss the remarkable coincidences in our lives, all those tricks of blood and fate that forced us to live the same life across so much earth and sea.


I will wish that I had been strong enough, secure enough, to live life the way she did, not so pragmatically, no so afraid to take risks. I will lament my choices, having married ________ because I was afraid to run, to follow my twin and our shared dreams away from this new Iran. I will think about my lost sister, put the receiver to my ear, and have a pretend conversation with her instead.

On that day, as I hold the phone to my ear, ignoring the frantic beep-beep-beep of the disconnected line, I will realize too late that I shouldn't have wasted the time I had with Mahtab, my other self. I should have been braver.


I have often felt that with my sister who is gone. Imagining what life would be like if she was still alive. And I have thought often how much I would give to be able to call and talk to my sister Libby about life and the present. And all I get is that frantic disconnect. There are no phone lines to Heaven.

One of the last pages, is my favorite passage....

Another year passes and Mahtab feels a pain in her heart, an immortal longing -- She doesn't belong here. You know this. I know it too. But I've kept her alive for so many years, and now that she has begun to feel the artificiality of it. It's time I let her go. This is not where Mahtab wishes to be. Not Iran. Not America.

When we were chidlren, she once asked Maman, "Do you ever wonder what it's like to be immortal ? To die and still live forever?"

"Everyone wonders," said Mamman. I remember her speech almsot word for word. "Some people think that children will make them immortal. Others say it is a lifetime's work, or that it comes from what others remember of them. Some people like the Mansooris, are just tired and want to join their friends. But we know that it's all about making a mark. Not just a lifetime of work, but important work."

Mahtab is tired now, stretched thin from her time in limbo, and she has already lived an extraordinary life. All that's left now is to sleep.

Good-bye, Mahtab jan. Rest in peace and know that you are a better woman than I.

I may never be able to shed the skin of the immigrant, put away the dreams of an old Iran that no longer exists, and start belonging somewhere. But my sister can.

Who knows if one day I will make a true legacy for myself. But I once promised myself this: In exile I will be a different kind of person.... I will no longer be other half of my dead sister. So I have written her story and the jinns have run away from me just as easily as they arrived. I have banished these immigrant fears through my sister's bite-sized television epiphanies so that I could wander the streets as if they were my own. And in the end, I will put Mahtab back in the water, many thousands of scoops of a teaspoon away-- where she belongs.


Sometimes grief is so hard to explain. And I love it when find a story that echoes my heart. This obviously isn't word for word my sentiments yet it strikes that chord deep within and resonates.

Tomorrow (March 7th) marks my sister's birth into Heaven. Some would call it a death anniversary. I call it her Heaven Birthday.

I miss her so. I long to burst out of my skin... to be done with this wandering and to break into my immortality. I'm not done though. I need to be brave and do the good work that God has for me. I hope I will make a mark in this world. My heart feels like it could break from longing. Not despair. But the missing of someone so precious in my life. Until then I keep wrestling. Someday I will see in full. Til then. One step at time. Moving forward. Pressing on.
book books grief Life me