Things we hold onto...

- May 06, 2013
How many of you remember Rainbow Brite? You probably had to be a child of the 80's to be a fan. I know I was. I get all nostalgic. Twink is the fuzzy white sprite next to her in the picture below. I even remember the movie that captured my imagination. Rainbow Brite and the Star Stealer, which included her unicorn, Starlite. 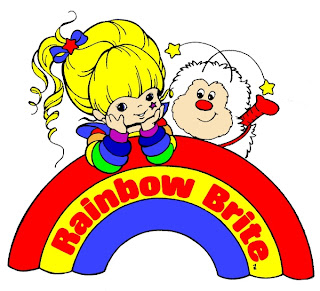 I believe I had a backpack and lunch box and I have definite memories of a birthday cake as a child that had rainbow brite on it. That's when I knew I was big stuff. I think one of my major fascinations, besides the amazing rainbow colors was the star on her cheek. I think I wanted a star on my cheek too!

It's funny the stuff that brings up feelings of joy and happiness that make absolutely no logical sense. There are things we hold onto, sometimes subconsciously, that have memories for us, that can continue to shape the person we are today.

Rainbow Brite was a fun positive memory... but I've been thinking of what other things have I unknowingly held onto. What negative memories have I clung to. What responses and coping mechanisms did I learn from bad things... that I still carry out to this day.

I believe there are bad habits and behaviors that I have developed as a response to things that happened. Sometimes the way I seize control in anyway I can to create a feeling of security when I feel insecure. I want to learn to reshape those things now. To recognize that at the time I used that a survival technique but now I'm an adult. I'm grown. I don't have to choose to respond in the same way.

I'm asking the Lord to help me to hold onto the good and to weed out the bad. Asking Him to change me more into His likeness. And to think about how I react to the world around me and respond when challenges arise.

Are there things you're tempted to hold onto? Bad habits? Or maybe even negative feelings? Anger? Bitterness? Jealousy?

Don't let those things eat you alive. Surrender them to the Lord and ask him to replace those things that have a hold on you. Replace those feelings with love, joy, peace, patience, and self-control. The Lord is faithful. He will redeem you. He is making all things new!
faith Life me Mondays Memories