Thoughts by the grave. 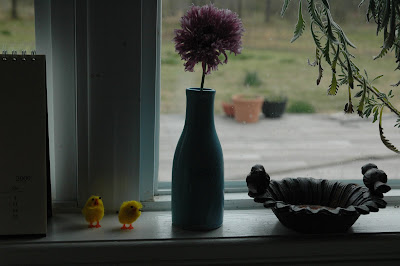 I went to my sister's grave today. I was finished with the IEP meeting and had a little time before the next and I went there. I didn't know I was going to go. It was a little impulsive. But I found myself driving on Cedar and I pulled in. The sky was blue and there were gorgeous clouds in the sky. There was warmth all around me and a slight breeze. I stood at her grave and just thought. I know she is not there. She's in Heaven. She's with Jesus.

But being where the remains of Libby's body was provoked some thoughts. I was glad that she was buried where there were horses close by. I could see them running and hear them whinnying. The sound of laughter was close. I could look up and see children playing at a nearby school.

I miss her. I miss the sound of her laughter and the way she would snort when she was tickled by something. The way she would crinkle her nose in amusement. I miss her advice and encouragement and wisdom. I miss her telling me what to do. Who says younger sisters aren't bossy didn't know my sister!

I miss her gasp of surprise. Her exasperated, "Jennnnnn...." with the accompanied rolling of the eyes. I also miss being able to reflect with her. I miss being able to talk to her about what's going on and what I'm struggling with. I miss her gentle prayers, her calm tears, and her sensitive spirit. Such a deep loss. I feel that loss with every passing day. The weight of it is with me today.

Weeping may last for a night but joy does indeed come...Psalm 30:5 says,

5 For his anger is but for a moment,
and his favor is for a lifetime. [1]
Weeping may tarry for the night,
but joy comes with the morning.

Samuel's IEP meeting went GREAT! I really like his teacher and am feeling confident about what we're doing. I think it's going to be really good for him. I have seen emerging with his language lately but I've also seen serious regression in language and behavior... he likes to act like a baby. I think he's wanting some attention. I don't blame him. I feel like it's been hard to get time one-on-one with him and also with Libby lately. She was asking me recently when we're going to go on a date. I hope to do that soon!

And so Samuel will start school next Wednesday! What a big boy!

I just spoke with the radiologist yesterday afternoon... she's going to get Michael in tomorrow (Friday) for an MRI. So wow- they bumped him up 5 weeks. I'm glad we'll be getting it done sooner rather than later. I just feel like there are all these new added "squeeze them in" kind of appointments going on. It's hard to play catch up! Michael's surgery is a week from today. It's coming up so fast. There is a part of me that feels a little uncertain about it. I don't know maybe it's just the dread of being in the hospital again. That gnawing wait that is in my pit of my stomach until I see my child come out of surgery. I'm dreading seeing Michael in pain. Dreading his little arms being in splints so he can't shove his hands in his mouths, which is his favorite source of comfort.

I think today is giving me enough burdens without me adding any more...

So I'm going to go do that. I need to seek the Lord and cry out to Him with all that is on my heart.
grief Life medical Samuel struggles

Caren said…
Jenn, you and Michael are in my prayers. I know Samuel will LOVE school! Both of my girls do :) All of your kids are beautiful and they are made in the image of God. I'm waiting for great news after Michael's surgery...specially a quick recovery! One step closer to getting rid of the feeding tube! Yay!
4:04 PM

Katherine M. said…
Beautiful post, Jennifer. I could see and hear Libby as you described her. I miss her too. I will be praying for you and your family. So good you like Samuel's teacher. Keep us posted!
10:53 PM

Jessica Rockey said…
I love the way you describe your sis... such vivid memories. I'm glad you took that moment to visit her grave... I always wonder if you go there, but don't ever want to bring it up. My heart it crying with you, friend.

Glad you're at peace with sending Samuel to school... when does it start?
10:19 AM

Jennifer said…
Next Wednesday... the day before Michael's surgery. Yikes! What am I saying??? My baby is going to school! Waaaaaahhh!