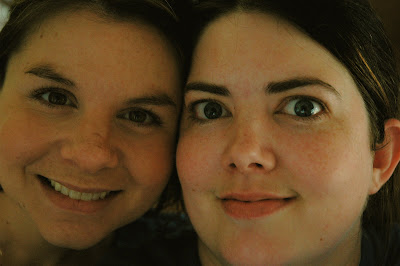 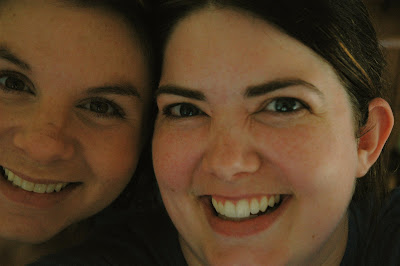 Mindi came over with her kids recently and we took these sel-pics of ourselves. It's so fun to spend time with friends.


There has been a nice rhythm and flow to the last several days. It's been nice having such lovely cool weather. I've been able to tackle a few small projects each day outside of the normal to-do's. Michael has been doing so GREAT! I am so proud of him. He has been such a doll as usual.

Mike has been working hard. He has a final exam next Tuesday and a paper to turn in (15 pages) and then he's done. He will be graduating on the 28th of this month! Can you believe it? We've done it! Okay, he's done it but I think you get the idea.

I have been exercising and eating well. Trying to do that whole "taking care of self thing".

I've been enjoying making home-made omelets lately. Onions, peppers, mushrooms, garlic, olive oil, six-pepper blend... mmm. With toast-fruit & grain bread by pepperidge farm... I love the blueberry acai. I have it with 100% juice- pineapple, orange, banana. I find when I start my day with protein I tend to eat better the rest of the day.

Libby has been so funny and I'm always finding myself amused at the things she says. She's so full of life. She loves to sing and dance all the time. She's quite the performer, like Mike (smirk)... okay, like me. She's very theatrical and dramatic and emotional. She's also very sensitive and compassionate. Tonight we made funny faces for a long time. She's hysterical. She's also on a doll kick. She can't get enough dolls or princess stuff. She likes to act like she's so much older than she is. Where she picks up her expressions I have no idea.

Samuel loves school. He gets so excited to go to school. On Saturday and Sunday he wore his backpack and stood at the door ready for school. He wanted to go on the bus. It was hard to explain that there was no school. His words are getting so much clearer. He's so happy and joyful. Lately he tells me when he's ready for a nap or bed. "Night-night" he says. I pick him up and he pops his thumb into his mouth. Content.

Ian is turning into a chunk. He eats and eats. He moves and crawls everywhere. He pulls up onto everything. We are looking for some gates. We have one folding gate but will need several more gates. He gets into EVERYTHING!!!!! He is a boy on the go.

Michael is kicking and moving more. He's getting a lot more noisy and verbal. It's exciting to see him so full of life and so responsive to sound. The helmet is doing it's job and his head is really shaping up well.

Mike and I will be going up for his graduation. We are debating on whether or not to bring Michael with us. We will be leaving the rest of the kids in VA though. It will be a nice break and will make it so much easier to travel.

Sarah said…
Thanks for this great update. Lovely to hear about your everyday life and imagine you all...

Congratulations to Mike on his forthcoming graduation. What an amazing achievement! Tell him well done from me...

Miss you girlie. As soon as we're moved into a house with more than one bedroom (can't come soon enough) the next thing we're saving for is tickets to Virginia!

Thank you for the update. It brings so much joy to my heart to get updates about the kids. Glad that Samuel loves school. (Compare your 2nd pic on this post to Samuel's on the sidebar...so cute how you both wrinkle your noses.) I'm glad Lib, Ian, and Michael are well too. God is so good. :)
Please tell Mike I am praying for him in this final stretch.

I will call you soon so we can chat a bit. I love you.

Jessica Rockey said…
Hey friend, thanks for the update! As for the graduation... uhhh, you should get your OWN cap and gown! Seriously, I bet Mike would agree!
I miss seeing Libby every week at ballet... give her a big hug from Miss Jessica! Tell her that I can't wait for her to come hold my baby (when she finally decides to arrive)! Love you, friend.
11:21 PM