It's all Greek to Me. 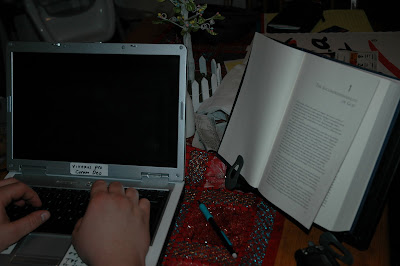 Um, I mean Hebrew. It's all Hebrew. Right now Mike is in the midst of Hebrew. He's got pages spread all over the kitchen table and I hear him mumbling under his breath. No he's not swearing. He's speaking Hebrew. Mike is an AMAZING student. He's diligent and hard-working and I am so PROUD of him. You should see the focused look on his face. A couple more months and I might have part of my honey back... we'll see. Right now though this is where it's at... and where it should be.

He still will take time to restle and snuggle the kids. He still takes care of us and meets our needs in addition to making straight A's. For example, tonight he let me have a night out... where I went to Target, Michael's Arts and Crafts and Barnes and Noble sans les infant (without the kiddos). I worked on my writing, an article about fear of man. Also I found the cutest little mini-album of Tinkerbell. I'm going to use it to put pictures of my Libby Anne Hope and write about what I love about her. She's hooked on Tinkerbell. Mike and I aren't too sure the influence we want Tinkerbell to have on our lives (or Libby's). Tink has a lot of envy, vanity, etc. issues to work through.... but in the end (of Peter Pan that is), there is some redemption, right? Anyway, I reallly am looking forward to making this album about Libby.

Samuel is loving plastics. he gets in the kitchen, opens the cupboard and wreaks havoc on my Gladware. It's fun to watch the first dozen times. Now I'm almost always keeping the gate up, blocking the kitchen.

So anyway, I got to go out tonight and Mike bathed the kids and put them to bed. He's really a gem.

P.S.~ The picture I used of Mike was in March studying for mid-terms. It probably was Greek at the time. So don't get confused.

Ashleigh said…
OK, that's impressive -- in the midst of his studies Mike still makes it a priority that you get out of the house. Sounds like you had a great evening!

Keep up the writing. You have a wonderful writing voice and style.
9:58 AM

Anonymous said…
That's so cool that mike is into Hebrew!! good for him! Also your little outing reminds me of some of the ones we go on. :] love you.
11:46 AM

Jenn said…
Okay, I am "catching" up on your life friend. Love you! Can't wait to read through all the posts I have missed!
1:43 PM

Wendy said…
Jenn,
Every time I read your posts I just think, "I want to be just like you when I grow up"! You are faithful. You go girl!! The Lord is truly shines in you and through you and Mike.
5:19 PM