One earring. One flip-flop. 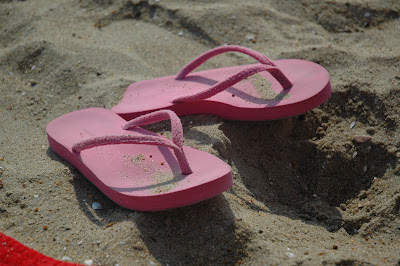 One of those days. At the beginning of the day we had some friends over for breakfast. Tosha made the yummiest pastries ever and we enjoyed them with eggs and bacon. I realized as soon as David and Tosha were over that I was just wearing one earring. Yep, I had taken the other one out a couple of days ago and realized I wasn't able to take the other one off becaue it was attached funnily. So that means when I was out last night at Trader Joe's and running other errands I was wearing only one earring.

Later this afternoon I discovered I was only wearing one flip-flop. Am I crazy? No. Not terribly. Okay, just a bit. I had been chasing the kids around and things were getting nutty and Libby's been acting up today. In a moment of attempted relaxation I kicked off a flip-flop meaning to kick off the other one. Libby had managed in that moment of kicking off the flip-flop to be playing with a toy that spins. Well, this spinning toy managed to wrap itself around Samuel's beautiful curls. I had to cut his hair. He was screaming. For all you panicking people out there I didn't have to cut much, his curls are there still. I just had to cut a SMALL piece. But still... not what I was planning. so I realized maybe an hour later that I had been only wearing one flip-flop the rest of the day.

Oh the life of motherhood. A headache. a neck ache. children screaming. Throwing tantrums. Disciplining again and again. Sweet kisses and little chubby hands wrapped around the neck. "Mommy, I love you's" in my ear. Toys scattered on the floor. Furniture slowly destroyed. Hair appts. carefully planned around times when someone can watch the kids. Diaper changes. Wet bathroom floors from baths gone wild. No make-up. Forgetting to shower, eat, or even get out of PJ's at times. Picking up the toys. Cleaning the dishes. Kissing the boo-boos. Praying together. Cleaning up yucky stuff. Left over cheerios glued to the highchair. Another brand new shirt destroyed within 5 minutes of wear. Little hands tugging on my skirt. Little teeth biting on my hand. Little feet kicking in opposition. Oh the madness and oh the joy. Contradictions flow out of mommyhood. Asking the question, "Where am I? Who am I? What on earth am I doing?" Proceeded by "Thank you God for these little ones." Make-up on the floor. Attempts at eating play-doh arrested in action.

so, what I can say. One earring. One flip-flop. One crazy family.

Bethany said…
Very funny. I have done so many funny things like that. It is awful and funny at the same time.

Sara of Sweden said…
Oh, imagine to have a cup of coffee without having to re-heat it 3 times before being able to drink it!... But Thea is so worth it!!! Motherhood unite!
7:19 AM

Wendy said…
So Charlie and I are finally going on a double date with friends last week...
I get into the car after detaching myself from Jessica who suddenly becomes super glue whenever I try to leave, and look down to discover my pink bushy flip flop slippers on my feet!! They were comfy and we were going to Boulder...ok, I'll go get my shoes, LOL!!!!!
2:07 PM

Ashleigh said…
Oh, motherhood. What a great description.
10:33 AM