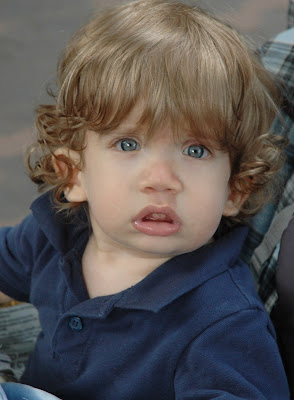 We had a serious battle trying to get Samuel set up for surgery. We had a lot of hoop jumping to do. He had to be seen by a cardiologist to verify that he didn't need a cardiac anastheologist. And we have had a time and a half with the surgery coordinator. We also had to see a regular anasthesiologist which Mike took Samuel to see. But this wouldn't have been set up if it were not for our incredible doctor. She contacted me and found out that we hadn't been responded to by the people who were supposed to be in touch with us and she got the ball rolling. The coordinator would NOT call us back and was ridiculous time and time again. She couldn't find our file. She didn't get the response from the cardiologist (who had sent her the report 3 weeks prior). I had even went and saw her in person....This was supposed to take place in June!!!! Oh well... God is so good to give us such a great Primary Care Physician for Samuel. She was angry at the very least that we weren't taken good care of and wanted us to see a urologist instead of a general surgeon.... so she made some calls and 15 min. later the coordinator calls us back with an appt. with the anasthesiologist and a surgery date.

So it's set for Aug. 29th. I am leaving for California this Thursday (the 23rd) and will be flying home one the 28th. So he'll have surgery the day after I return. Whew... didn't plan that but at least I will be here. We don't know the time of the surgery yet. We call the day before surgery and they tell us what time he's scheduled for. So I will update you with that soon.

My dear mother-in-law will be staying and watching Libby for us. Samuel is to have a hydrocele repaired (this is to prevent a hernia). This should be normally outpatient surgery but because of Samuel's breathing issues he will be admitted and spend a night so they can monitor his breathing. So nobody worry, it's very minor but necessary. The procedure itself takes 25 min. I will keep you all posted.

We are so blessed to live in a a country that has such great medical technology and to be so close to a wonderful children's hospital.

(Isn't he a cutie? he usually smiles for every picture but since I was talking about surgery I was trying to find a more "serious" looking picture.)

Michelle said…
Absolute Cutie! I will be praying.
9:34 PM

Wendy said…
We had the same repair done during one of our surgeries on one boy...I think Silas. I think Isaacs actually repaired itself after one year old. Anyway, just know we are praying for you Jenn. And have fun in CA!!! What a great time!
10:26 PM

Bethany said…
Oh little sweetie. I will be praying for him.
12:01 AM

erin. said…
He IS cute. First thing I thought when I opened your blog..."what a cute picture!"

Jenn said…
We will be praying for little Samuel
7:37 AM