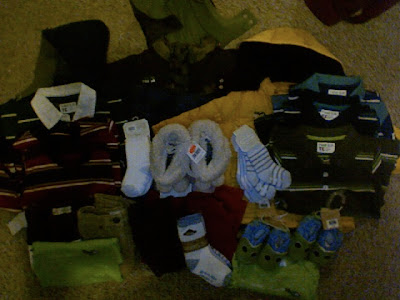 Excuse my laziness. I've been using my apple photo booth to take pictures instead of my camera. I'm too tired to make too much effort and shoot the pictures and download them. That's why the pictures are grainy and fuzzy... my lack of effort :)

The only nice thing about this week-end was I had a little bit of girl time with Libby and my mom. We went out to IHOP and then went to the OLD NAVY baby/kids sale. I was tempted to get a ton of stuff but I stuck with some basics and necessary stuff. I was really excited by how much I saved. I bought Samuel and the twins coats for next winter. I found matching shirts for the 3 of them. I found the twins some cords and the cutest shirts with turtles on them that say "Thrill Seeker" (so appropriate for hunting with my dad for turtles, snakes, and frogs down at my parents farm). I found four adorable polo shirts for Samuel. I got all the boys new socks. I found a long-sleeve and tank-top for Libby as well as some boots for next year. The best part was seeing things ring up for $2, $3, $5. The coats were each $10... marked down from $42! And I found some shoes for the twins for fall/winter time. All for a total of $97. The grand total without the sales and discounts/mark-downs would have been $314. So I saved $217! I am so thankful because I realize that it's going to be pricey to clothe 4 children! Especially when two of them will probably be the same size!

Ashleigh said…
Old Navy has great sales! I love when they really mark things down. Glad you were able to find some deals.
8:36 PM

Sarah said…
How great to be able to shop for your precious new little ones and save good money. I miss Old Navy....
3:31 AM